What is Qurban in Islam?

What is Qurban in Islam

Qurban is a religious ritual in Islam which involves sacrificing animals on certain days in order to seek the pleasure of God. It is a religion festival which coincides with the largest gathering of Muslims from all over the world in Mecca for Hajj, the yearly pilgrimage. It is a ritual that is celebrated by a billion Muslims around the world, which has great historical, religious and cultural significance. Find more about Qurban FAQ here.

Sacrificing animals to attain the pleasure of God has been an integral part of all ancient religions. Islam, being an Abrahamic religion, has a long history starting from the first man on earth, Adam. According to Islamic history, Qurban is an act which replicates the actions of Prophet Abraham, one of the most important figures in three main religions, Christianity, Judaism and Islam. According to Islamic history and teachings, Abraham was asked by God in a dream to sacrifice the one thing that was most dear to him more than anything else.

Abraham’s son Ismael, the direct ancestor of Prophet Muhammad, was the dearest to Abraham. But since Allah (the Islamic / Arabic term for God) had asked him for a sacrifice, Abraham decided to sacrifice his beloved son to please and follow the commands and wish of his Lord. This act showed Abraham’s devotion and obedience of God. As Abraham took his beloved child Ismael to the slaughterhouse, and told him that God has asked him for a sacrifice (Qurban). Young Ismael too very obediently agreed to lay his life down for the love of God.

But as soon as Abraham picked up the knife, and closed his eyes so he wouldn’t have to look at his son while slaughtering him, Allah sent an angel with a sheep which replaced Ismael. When Abraham opened his eyes, a slain sheep lay before him and a voice told him that he had passed God’s test. Allah did not actually want Abraham to Qurban (sacrifice) his son, it was just a test and Abraham cleared the test and proved his potent love for his Lord.

How and when is Qurban done?

Every year on the 10th, 11th and 12th of Zil-hajj, the 12th month of the Islamic calendar, Muslims around the world slaughter or Qurban goats, sheep, cows and camels in the name of Allah to commemorate the sacrifice made by Abraham thousands of years ago. This event is also known as Eid ul Adha and it lasts three days. This ritualistic sacrifice of animals also coincides with the largest gathering of Muslims in mecca to perform the annual pilgrimage, also known as Hajj.

The meat of the animals that are Qurban is divided into three parts, one for the poor, the second for the relatives and the third for the consumption of the person’s own family. The essence of Qurban is on the division and distribution of meat amongst the poor who cannot afford meat on their own.

Lesson given by Qurban

Each religious ritual has a lesson for its followers, and similarly there’s an extremely useful lesson in Qurban for Muslims. Qurban teaches Muslims to share, and take care of their fellow human beings even if it requires sacrifice. By slaughtering expensive cattle and goats and distributing it to the poor and hungry members of the society, Qurbani teaches Muslims to take care of the whole community and sacrifice for them to seek the pleasure of God. learn more about explanation of Zakat Al Mal.

The 10 Tips For Public Speaking 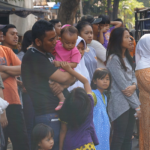 What is Qurban in Islam?