July 8, 2020
How many different types of pasta are there? Pasta Shapes & Names

How many different types of pasta are there? 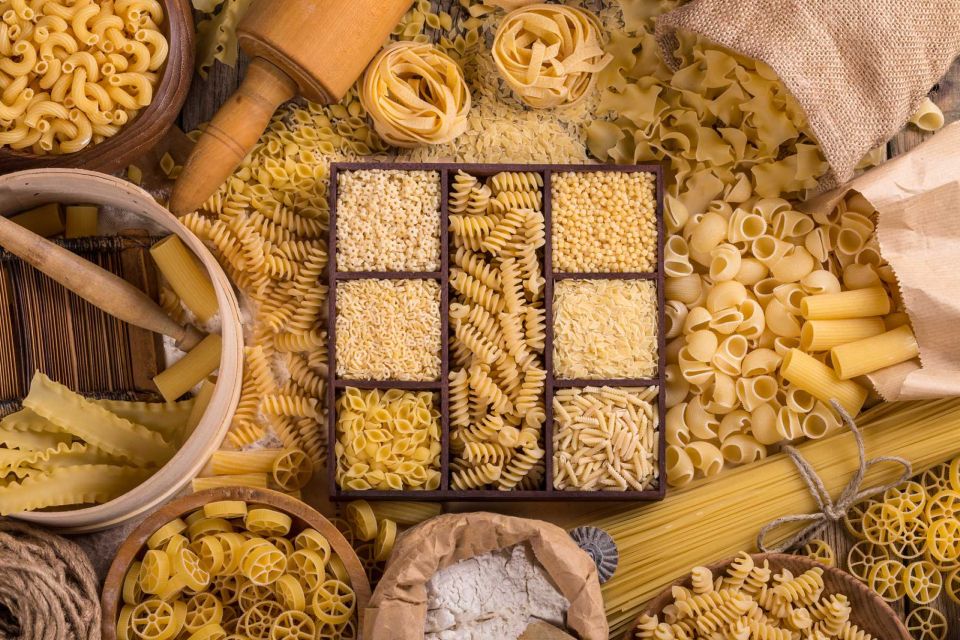 If you think that your all-time favourite pasta was originated in Italy, then you are absolutely wrong. The oldest pasta noodles ever found were unearthed during an archaeological exploration in China. Below 10 feet under the ground, the noodles were found in a bowl and made from two types of grains grown in China.  These pasta noodles were estimated to be 7,000 years old. Some theories say that pasta came to Italy via Marco Polo, a famous Venetian explorer. He carried the noodles with him, which he found in China. A few lines about this piece of information have been mentioned in the book ‘The Travels of Marco Polo’. Another story about the origin of pasta comes all the way from Greece. During the 3rd century BC, when the city of Naples was founded by the Greeks, the citizens of that area already had a dish called ‘Macaria’ made out of barley dried under the sun. In fact, your favourite lasagna has its predecessor ‘laganum’ or ‘Laganas’; which are dated back to 106 BC during the Roman reign.

How to pair Pasta with Sauce

There are roughly 350 different types of pasta around the globe and about 4X that many names for them. For example, the Farfalle pasta is often called ‘butterfly pasta’ or ‘bowtie pasta’ because of its shape. Pasta shapes and names can be organized into different groups like long pasta (angel hair and spaghetti), tube pasta (penne), soup pasta (alphabet and orzo), and stuffed pasta (ravioli and tortellini).

Chefs use different shapes and sizes of pasta for different purposes. Various kinds of pasta are served according to the occasion, while others hold sauces better. Thin pasta, like angel hair, is served with thin sauces, while thicker sauces work well with heavier pasta. Tomato sauces seem to bind better with round pasta, while cream sauces go better with flat pasta. Similarly, stuffed pasta requires special pasta shapes (ravioli and manicotti). 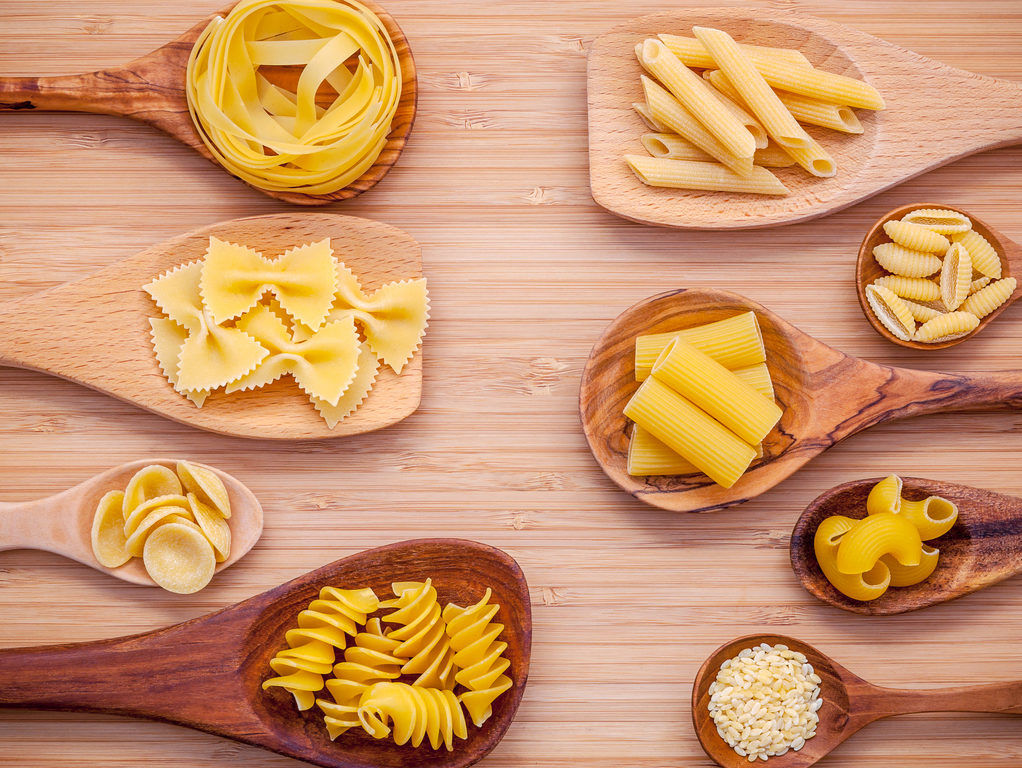 The Popular types of pasta

Now let’s get into the tastiest part of this article – different types of pasta categorized according to their shapes and size. Below is the list of various type of popular pasta consumed around the world-

Spaghetti is the plural form of the Italian term Spaghetto, derived from Spago. Spago means ‘thin string’. It is a long and thin type of pasta, made of semolina or flour and water. Spaghetti is one of the most commonly used pasta in the world. According to some theories, spaghetti was originated in China and was imported to Venice by Marco Polo, a popular traveller. These long, thin and round-shaped noodles are commonly served with a wide range of sauces, vegetables, meats and exotic sauces, like marinara sauce. Carbonara is one of the most famous dishes made of Spaghetti pasta. 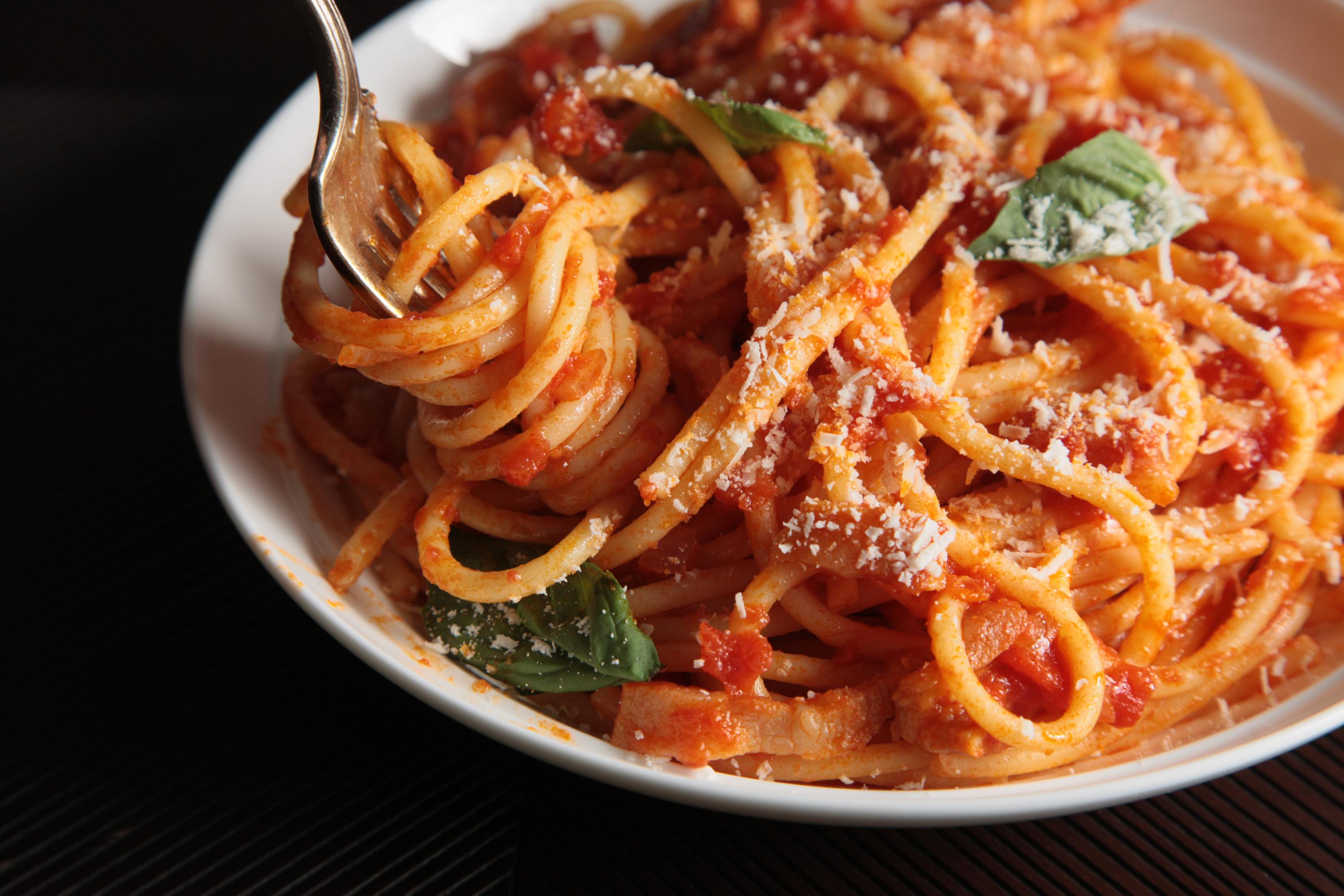 This pasta is a thicker version of spaghetti with a hole running through the middle. The shape of this pasta is like a thinner version of straw. The name of this pasta is derived from the Italian word ‘buco’ or ‘bucato’ meaning ‘hole ’or ‘pierced’. It was originated in the Italian region of Naples, Liguria and Lazio. Bucatini is served with savoury food items like pancetta, cured meat, cheese eggs, anchovies, and sardines. The best way to have Bucatini is to blend it with a buttery sauce.

Pappardelle is large, very broad, flat pasta noodles originating from the central-southern region of Tuscany in Italy. This ribbon-shaped pasta is cut into very broad strips. The freshly made are 2-3 centimeters wide and have fluted edges. The dried ones have straight sides.  Pappardelle is among the types of pasta that taste best with a wide range of sauces, from meat to shellfish to vegetables, like artichokes, fava beans and prosciutto.

This super popular pasta is mostly used in Rome. It is a long, flat, ribbon-like pasta with decent thickness, usually measuring 10 inches long and ¼th of an inch wide. The best recipe of fettuccine includes Cherry tomatoes, bell peppers and creamy Alfredo sauce.

Farfalle is commonly known as bow-tie pasta or butterfly pasta. The name is derived from the Italian word farfalle meaning butterflies. This type of pasta dates back to the 16th century in the Lombardy region of Northern Italy. It commonly used in dishes with light sauces or salads.

The penne pasta originated in 1865 when a pasta maker from San Martino d’Albaro (Genoa), Giovanni Battista Capurro, made it on certain demand. It is small cylindrical shaped pasta which is cut into a pen shape without crushing it. Penne pasta is one of the ten most popular types of pasta in the world. It is often stuffed with various fillings and served in tomato or cream sauce.

Also known as macaroni, it is perhaps one of the most popular pasta styles in the world. It originated in northern and central Italy and is shaped like a small, slightly curved, tubular shape that makes it very flexible to use. Maccheroni is commonly used in baked pasta dishes, soups, or tossed with cheese (Did we say Mac and Cheese) or vegetable sauces.

The name is derived from the Italian word ‘conchiglia’, meaning seashell, it is a small, seashell-shaped pasta which is popular around the world.  This type of past is specially designed to hold more sauce. Conchiglie is commonly used in soups, salads and main dishes.

This uber-popular pasta was originated in the Lombardy region in Rome. The shape of the Ravioli is square with ruffled edges. It is often stuffed with various fillings like meat, cheese, vegetables and seafood.

It is ring-shaped pasta, also described as navel-shaped. Therefore, it is also called as navel button pasta. Originating from the Emilia region of Italy, tortellini is often stuffed with a combination of meat (prosciutto, pork, etc.) and/or cheese.

It is small, snail-shaped pasta shells with one closed end to hold the sauce better. They find their roots in Sicily and are usually enjoyed with slightly heavier, chunkier sauces.

Mezzelune is also known as half-moon pasta. It is stuffed with Bitto cheese, eggs, milk, and white pepper. Originated in Tyrol in northern Italy, it is normally served with a sauce comprised of porcini mushrooms, white wine and sweet butter.

Originally hailing from Naples, ditalini means ‘small thimbles’. It is cut into tubes that are similar to the size of a kernel of corn, and it is also called “short macaroni” due to its smaller size. Ditalini is usually served with ricotta cheese or broccoli and is best for use in soups.

The name literally means ‘tiny dough’ in English. Also known by the name Acini Di Pepe, this type of pasta is so small that it looks like tiny grains. It takes around 4 to 9 minutes to cook this pasta. Pastina is commonly used in soups, salads, and is a popular ingredient for Italian Wedding soup.

Concluding, if you are using the same type of pasta for all your meals, it’s better to try out other varieties of pasta. To make things fun, you can even try making your own homemade pasta dough – It’s quite easy than you think!

How much pasta is consumed by an average Italian?

An average Italian consumes about 60 pounds of pasta a year.

Which are the 2 important days dedicated to pasta?

When and where did the first pasta factory established in the US?

The first pasta factory in the US was established in 1848 by Antoine Zerega, a French immigrant. The factory was built in Brooklyn and was named as Zerega.

Where can I buy pasta cookers?

Depending on your location, here are the recommended pasta cooker distributors: 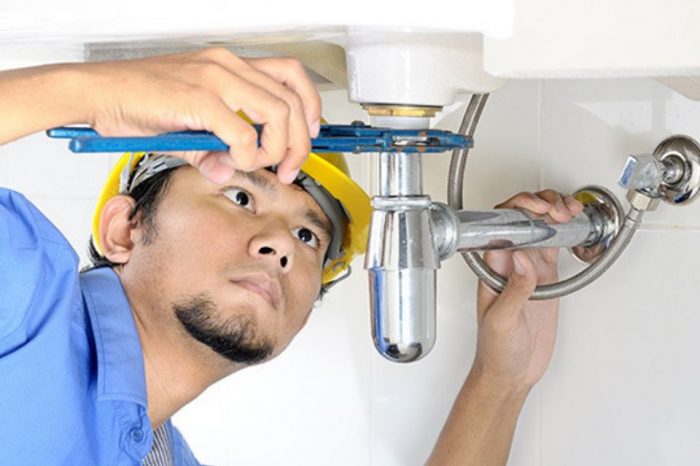 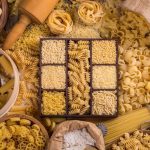 How many different types of pasta are there?